A review of holiday homes in Hermanus covers two categories of accommodation. The  rst category refers to fairly simple, relatively inexpensive holiday homes built in the early days of the development of Voëlklip. The second category is the larger houses that were built by wealthy inhabitants or regular visitors and have become historically important. These are mainly close to the ocean in Westcli , Eastcli and Kwaaiwater and are described in conservation reports as ‘seaside villas’.

Of course, people took holidays in Hermanus long before any houses were built. Before 1920, reaching your holiday home could involve a serious journey. SJ du Toit recorded a journey made by the Pienaar family from Somerset West to their holiday camp in Voëlklip, around 1900.

Ds. Pienaar and his family travelled by ox-wagon, and taking the seaside route past Rooiels and Kleinmond, arrived at Voëlklip (then known as Mosselrivier). There were no proper bridges across the Steenbras or Palmiet Rivers and crossing them often posed hardship. During years of heavy summer rains in the area the Steenbras River was quite deep for the wagon and oxen to ford, but they managed to get through.

Today, it takes motorists less than an hour to cover the distance between Somerset West and Hermanus. By ox-wagon in those days it was a threeday journey. Their  rst outspan and overnight was at the Steenbras River and the next night at the Palmiet River. It was quite late on the third day when they arrived at Mossel River (Voëlklip). Camp was pitched near the present Kammabaai and fresh water could be collected from the Mossel River. Huge milkwood trees gave protection and there was a natural kraal where the oxen could sleep at night.

Voëlklip (or Mossel River Seaside Township, as it was originally known) was developed initially with holiday homes owned by one family and used by them exclusively for holidays. The thatched dwellings were mainly variations on the traditional ‘fisherman’s cottage’ and small verandas were often built between the front door and the street.

The Moore family built most of the early holiday homes in Voëlklip. They had come from Britain at the invitation of Sir Robert Stanford to build his famous water-driven mill. The family had traditional skills in shipbuilding and carpentry, and to these they quickly added building skills.

The head of the family was John William Moore. He and his brother, Ephraim George Moore both worked on the mill. George also set up a small shop in Stanford which prospered, and later opened another shop in Hermanus, with members of the Warrington family. His grandson, Hans Jacob Moore became a builder and many of the houses in Stanford were built by him. Later he, his brother and sons were the first builders in Voëlklip.

De Mondhuis
The  rst holiday home in Hermanus was built in 1790 by Hendrik Cloete as a retreat from the concerns of Groot Constantia and other farms he owned in the Cape. The house is located close to the ‘lagoon’ (Klein River Estuary) and is still in use, though considerably changed over time and completely renovated by the present owners, the Hamilton Russells. Several managers lived in the house over the next decades. In 1913 the house was bought by Michael du Toit of Caledon and many years later, SJ du Toit recorded an interview with one of his grandchildren, Miempie Cronje:

The old house was one building, but in two sections, like barns. There were shutters on all the windows and the walls were three feet thick. The windowsills were so wide we could sleep in them. The house was very cool in summer and warm in winter.

On the stoep were two rooms and inside a big bedroom, dining/sitting room and kitchen. On the eastern end was another room with a fireplace… In the other section the Henns had a small house, with a kitchen and its huge bakoond, a small sitting room and one other room. The house resembled four flats.

At the back were stables and the outside toilet. The whole place was enclosed by a ring-wall and there were steps leading down to the river. Between the two sections, also under the roof, was a long open space where the wagon or cart was pushed.

The Homestead
Soon after he bought the farm Mossel River, Duncan McFarlane built a new house near the Mossel River and called it The Homestead. This was around 1860. After Duncan’s death in 1884, his daughter Agnes Stroud inherited the farm and, after her, her daughter Henrietta and Henrietta’s husband, John Evered Poole. The Pooles lived at The Homestead during the Anglo-Boer War while they were building their new house, Highfield, on the opposite side of the track to Stanford (now the R43/Main Road).

Generations of McFarlanes holidayed at The Homestead in the Victorian manner. Women and children of the family, accompanied by nurses, maids and domestic sta were sent o to Hermanus for the entire three months of the summer holiday. The gentlemen of the family travelled down at weekends, whenever business permitted. Much later, a descendant of the family described their activities to SJ du Toit:

My grandmother, accompanied by her household and friends, would then spend the summer at Mossel River. Activities comprised organised walks to the beaches, collecting shells at Kwaaiwater, (walking) up the (Mossel) river into Fernkloof, picnics on the water’s edge and so on.

In 1916 The Homestead was sold to Ken and Angela Frater and then in 1979 to the Mouton family. During WWI the house had accommodated nurses training for service in the War and it became known as The Nurses’ Home. When making the home available to the nurses, the MacFarlane family made only two conditions: Fly the Union Jack whenever anyone is in residence, and never cut down the milkwoods.

Rayfraden
Another interesting holiday home is located at 232 Main Road in Eastcliff , about 300 metres from the present Eastcli Centre. It lies on the ocean side of Main Road behind a high hedge. The Main Road makes a sharp bend to the right at this point and drivers need to take care to negotiate “Swingler’s Corner”, as the bend was known in earlier days. The builders and first owners of the house were the Swingler family, who were prominent in Hermanus and Onrus from the 1930s to the early 2000s.

The Swinglers’ interest in Hermanus started in the early 1930s when George Swingler began investing in property in the town. George was the City Electrical Engineer of Cape Town for more than 25 years and later General Manager of the Electricity Supply Commission (Escom, prior to Eskom). The Swingler family had a tradition of naming their residences and, while living in Cape Town, had combined syllables from their children’s names to create the name of ‘Radnor’ for their home. They followed a similar process in Hermanus. George and Janie named the house ‘Rayfraden’, after their three sons Raymond, Frank and Denys.

Unfortunately, they did not have a long tenure of the house. In 1940, George was seconded into the armed forces by the South African government and transferred to New York, where he ‘filled a vital role in the procurement of war supplies’ for the country. He returned to South Africa in 1943, but was already suffering from hypertension and died in 1946. Rayfraden was sold to the Hersov family for £17 000, (about £6, 7 million today), who still own it. 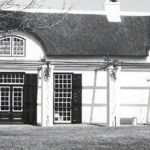 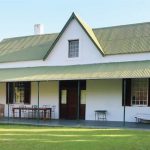 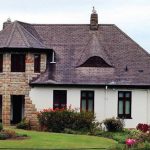 1. The Moore House in Voëlklip. Hans Jacob Moore, his brother and sons built most of the early holiday homes in Voëlklip.
2. De Mondhuis was the first holiday home in Hermanus, built in 1790 by Hendrik Cloete of Groot Constantia.
3. The Homestead was built by Duncan McFarlane near the Mossel River around 1860.
4. Rayfraden was built by the Swingler family in the 1930s.