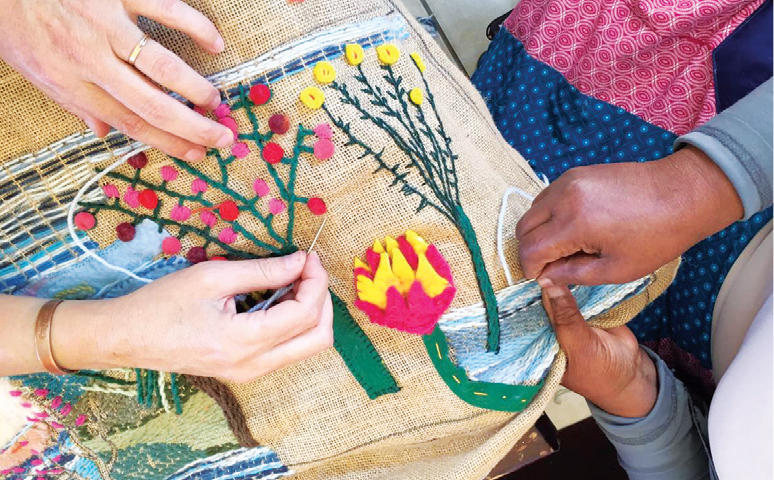 Red Cross Hermanus kindly made an allocation of money to this project.

It is probably fair to say that the past year has been a difficult one for all the residents of Greater Hermanus. The eruption and re-eruption of violent protests has torn apart the fabric of life in this beautiful town at the edge of a timeless ocean.

The disruption has had many consequences, some good and some very bad, some anticipated and some surprising. One of the positive consequences was that a significant number of people in the different communities began to realize that whatever our differences, our lives are intimately tied together. What is good for one, must be good for all; and what is life-threatening to one is life-threatening for the social and economic well-being of the entire town.

A group of six local women took matters into their hands. They formed the Hermanus Art & History Project with the aim of creating a non-threatening platform where all sectors of the community could share their stories and learn to work together on a joint project, which would bring pride and hope to the town. They had heard of the Keiskamma Art Project and the 120-metre-long tapestry the women of the small town of Hamburg in the Eastern Cape had embroidered for our Houses of Parliament and thought this might be the answer.

Inspired by the mediaeval Bayeux tapestry depicting the Norman conquest of England in 1066, the Keiskamma women had created a tapestry using thread, wire, felt, beads and even Nguni cowhide to depict the Eastern Cape Frontier Wars of 1779-1878. The Hermanus group felt this might be just the kind of project they were looking for where the diff erent communities could get together to tell the stories of each of them in a tangible form that would be accessible to generations to come. No sooner said than done for Carol Hofmeyr, founder in 2000 of the now world-renowned Keiskamma Art Project and whose son lives in Hermanus was contacted, and without any hesitation, she agreed to help. Together they decided that the tapestry would showcase the narratives of all the peoples of Hermanus, giving them the opportunity to be heard, understood and respected.

The hope was that in making art and telling stories, our understanding of one another would improve and we would all be able to claim our place in the history of this place and this country. In addition, the participants would gain a new skill, which could possibly become income-generating.

The idea was that the communities of Zwelihle, Mount Pleasant, Hawston and Hermanus town would each design and hand-stitch a six-metre section telling their own stories, and that these would be sewn together to form the full sixty-metre long tapestry.

Each participant’s name and the name of the place they came from would be embroidered into the piece. From start to fi nish, the project would probably take about two years and the story would include events right up until its completion.

On the Hermanus side, word went out to recruit participants in Zwelihle, first to design their section of the piece and then to do the embroidery. In the meantime, the ladies of the Art/History Project started soliciting donations both in cash and in kind (embroidery thread, wool, needles, whatever they had that might be useful). They themselves invested money in the project in order, amongst others, to provide the participants with lunch and tea during the workshops, as well as a small stipend. The Zwelihle Youth Café at the RDP Centre made a venue available.

About a month ago, the fi rst group of 20 Zwelihle participants (both men and women) got together with Carol as the main facilitator, to design their section of the tapestry. Over the period of a week, they began to tell their stories, both personal and historic, in word and art. Through a process of consensus-building, they were able to decide on the design and it was transferred by koki pen on to a six-metre long strip of hessian, approximately 50cm wide.

Last week Carol was back again with three of her embroiderers from Keiskamma to teach a new set of 25 participants (including a couple of members of the original group) to embroider and appliqué the design. The group included elderly ladies, a young girl of 13, two young men, one of whom crochets and creates dreadlocks for a living, and some members of the Art/History Project.

One could have heard a pin drop as they sat at two long tables, each concentrating on their particular section of the tapestry. As Carol says, “They have been absolutely wonderful to work with, so focused, enthusiastic and committed. It’s been really exciting for all of us from the Eastern Cape to be part of this project. It’s going to be fantastic, something the whole town will be proud of.”

The completed Zwelihle section was on display last week during the Night of a Thousand Drawings at the Kunskantoor Gallery, owned by Carol’s daughter-in-law, Renzske Scholtz, but will be officially launched on Thursday, 20 December. The Keiskamma Project has now found a permanent home in Renzske’s gallery, where other embroidered artworks and crafts such as cushion covers are on display.

The next phase of the project will take place in Mount Pleasant during the first quarter of 2019. As one of the organisers, local artist Gillian Hahn says, “Although we’re trying to keep costs to a minimum, we are really hoping that people will want to be part of the project by sponsoring a metre or so of the piece, so that we can see it through to the end.”

She points to a messy ball of thread exploding in a corner of the room. “You see this, this is what the project is all about, undoing the tangle that Hermanus has become. And we’ll do it. We all want this to succeed and it will.”

For more information contact Kathie Buley on pjbuley@telkomsa.net or Angela Heslop on aheslop@hermanus.co.za. Please attend the opening of the Art & History Project at Kunskantoor in The Courtyard, off Harbour Road, on Thursday 20 December at 18:00. Or visit keiskamma.com for more information.