History from Crime: What the Criminal Records can tell us about Cape Society in the Early Colonial Period

History from Crime: What the Criminal Records can tell us about Cape Society in the Early Colonial Period 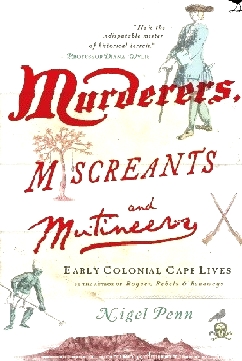 Professor Nigel Penn is an Associate Professor in the Department of Historical Studies at the University of Cape Town. He has written about the impact of colonialism on the Khoisan societies of Southern Africa and the nature of early Dutch and British colonialism. He uses the techniques of microhistory and cultural history th illuminate the contacts between different societies and individuals in the colonial context of Southern Africa. He is researching the history of the Cape convict system and is planning a book on the history of the Khoikhoi. Previous books include The Forgotten Frontier and Rogues, Rebels and Runaways. At our meeting he will be speaking about his most recent book Murderers, Miscreant and Mutineers: Early Cape Characters.

This is a series of historical narratives based on criminal cases found in the Cape archives. He will discuss episodes from the book explaining how these cases, drawn from the years 1700 to 1820, illuminate aspects of the social history of the Cape that are not accessible through other sources. He will look, in particular, at issues related to sex and violence.

The content of Prof Penn’s work is of particular interest to us in the Overberg as many of the criminals he identifies fled the law by going ‘over the mountains’ and seeking refuge in local communities and on farms around Hermanus. For instance, Samson Dyer (an American negro after whom Dyer Island is named) is believed to have been a deserter from an American vessel that called at the Cape.

The characters to be presented by the author include Maria Mouton, the first white woman to be executed at the Cape, for her adulterous affair with a slave and the murder of her husband. Also mentioned is a missionary, Johannes Seidenfaden, a married man, who tried to seduce his Khoikhoi housekeeper on five occasions and turned his mission station at Suurbraak near Swellendam into a virtual prison camp.