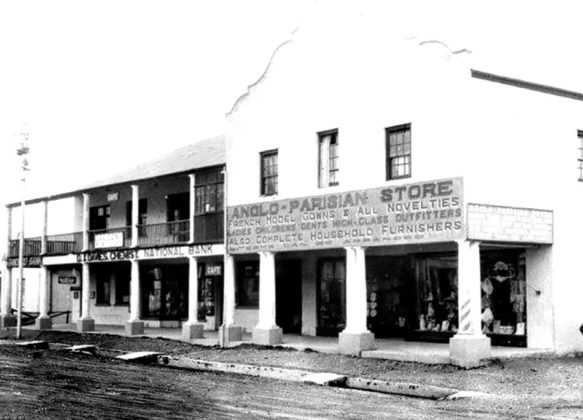 In Part 2 of his comprehensive history on the early development of business in Hermanus, DR ROBIN LEE of the Hermanus History Society examined the important factors that allowed businesses to gain momentum in the late 1800s and early 1900s. This week, Part 3 focuses on the period 1915 – 1930.
Physical evidence of the presence of the bank remains in the building, in the form of a safe. The door of the safe is still in excellent working condition and reveals some interesting information. The manufacturer was a firm in London by the name of John Tann. This firm was the oldest and best safe-maker of its time in England, having been established by Edward Tann in 1790. National Bank installed the safe, which was later used by Alex Grant, the pharmacist, to store dangerous medicines, and later still, by The Factory Shop. It is still fully operational.At least three banks opened in Hermanus in the early 20th century, the largest of which was The National Bank of South Africa (Pty) Ltd, with premises in the Balcony Building in Harbour Road. This was the forerunner of Barclays Bank and, later, the First National Bank (FNB).

Development started in Harbour Road, from Visbaai (the Old Harbour) to the Balcony Building. Doctors Cohn and Daneel set up rooms in Harbour Road; the family of JJ du Toit divided their business into three departments in Harbour Road, with one department where Warrington Place is now, distributing building materials. Supplies went from here to the renovation of the Windsor Hotel in about 1930. I have personally seen the stamp of JJ du Toit on the timber used for the stairway of the hotel.

In Main Road, the Rainsford family took over the original general dealer’s business belonging to the Warringtons and developed it into a full department store before selling to the du Plooy family.

Johnny Stemmet started a mineral water factory behind the Warrington house in Marine Drive. He had bought the house and developed it into Stemmet’s Private Hotel, later to become the Esplanade Hotel. He named the mineral water business The Springbok Mineral Water Factory. It was successful, and Stemmet later sold it to Eric Westcott. The new owner moved it to Main Road and later to the east end of Mitchell Street, where abundant pure water was available. Westcott expanded the business to supply the entire Overberg and, when he won the Coca-Cola franchise, business boomed. In the 1940s he was able to buy a large house in Eastcliff, known as Roman Rock.

From about 1920, service stations (garages) started to be opened. Prominent amongst these were Lister’s, Marriott’s, and Groenewald’s in the village, and Brookhill Motors in Voëlklip.

The Balcony Building was constructed in the early 1900s, perhaps as early as 1906, by Robert Walter MacFarlane (1874 – 1955), son of one of the original settlers. Several of the men in the family were named Walter, so Robert Walter was generally known as Wattie. He constructed the Ocean View Hotel at about the same time as the Balcony Building.The tempo of establishing new businesses quickened in the period 1920 – 1930. The Bay View Hotel was built on the site of Roskeen, the old Morton residence and school in Eastcliff. The Lipschitz family took over from the Oblowitz family at Lemm’s Corner. Two modest accommodation facilities opened – the De Hoop Boarding House and the Aberdeen Street Guesthouse, under Mrs Steyn and Mrs Geldenhuys respectively. Warrington’s shop was extended and moved to a new location in Main Road and another general dealership named Slabbert’s opened on the corner of Church and Myrtle Streets. Eastcliff was growing, too, and Bekker’s Store opened on the corner of Main Road and Stemmet Street.

The Balcony Building was almost certainly the largest commercial building in Hermanus at the time it was built, and was well-situated, at the junction of the two best-known streets in Hermanus, and adjacent to the Anglican Church. It was also diagonally opposite the Victoria Hotel which belonged to Walter MacFarlane Snr.

On the ground floor, fronting onto Harbour Road in the early 1920s, was I Davies Pharmacy, the first pharmacy in Hermanus. It was a branch of a similar business in Caledon owned by Idris Davies, who recruited Alexander Grant from Scotland to manage the branch. After a few years, Grant was able to buy the business. He changed the name to Alex Grant Pharmacy and managed the business himself until the early 1970s. Now owned by Hermanus Pharmacies, it continues to operate under the same name, at the Gateway Centre.

We also know that at one time, the firm of Beunderman’s Electrical had a shop next to Alex Grant Pharmacy. Facing on to Main Road and St Peter’s Lane, was a business belonging to the Nigrini family. The owner was Malita (Bunny) Nigrini and locals described it as a toy shop with a bicycle shop at the rear. Later, a women’s clothing shop known as Leonie’s operated from these premises.
Other firms that rented space in the Balcony Building included Hermanus Construction, owned by master builder George Vermeulen, who built some of the public building edifices and several private houses in Stanford and Hermanus. Two other businesses we know of were those of accountants, Maddocks and JW Koegelenberg. Two dentists, Dr Wrigley and, later, Dr Seeliger, practised in the Balcony Building. A photographer, Arthur Wilson, also had a studio in the building – the late historian, SJ du Toit described him as a favourite for portraits, family, and wedding groups.

The municipality regularly rented office space in the Balcony Building, especially during long, drawn-out controversies about where to build the new municipal offices. At one stage, the town clerk suggested that the municipality should buy the Balcony Building as its new headquarters. The sheriff of Hermanus, in the latter part of the 19th century, also had his office in the building.

Many of the historical themes in connection with business development in Hermanus come to light in the growth of Harbour Road and the building of the Balcony Building. We see the conversion of family homes for business purposes; the strong presence of early settler families is still felt in various businesses; and businesses grew by the addition of activities related to an original shop, and degrees of specialisation in business services.

The Balcony Building was an indication of yet another capitalist economic development: the spread of specialisation. Retail firms no longer had to build their own premises or convert part of their domestic accommodation. Instead, they could rent space from the owner of a building and focus on the quality of service in their own businesses.

In Part 4 of this article, the author will be taking a close look at the many changes that led to the development of a CBD in Hermanus. 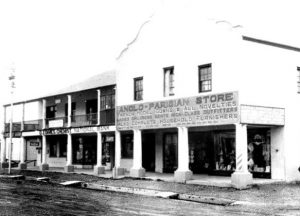 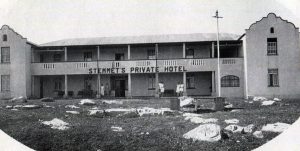