In Part 1 of this article, we looked at the earliest moves towards developing businesses in Hermanus, and how they gained momentum in the late 1800s when original settler families, who had arrived as fishermen, entered the property market and bought sites.

From the information available for the period 1895 –1915, three important facts can be identified:

First, Mosselrivier Farm was a farm in name only. No one was actually farming it. Thus, it was easier for the Colonial Government to proclaim parts of the land as ‘commonage’ and allow the Village Management to survey and sell plots. In this way, the land was available for businesses.

Secondly, the early families were familiar with the capitalist economy, either from experience in their home countries or from their time at the Cape. Third, there was no other economic model available, and no organised grouping opposed the shift into a capitalist system. These facts are essential to the later history of the economy of our region.

We see that families that had come to Hermanus as subsistence fisherfolk were acquiring permanent residences and places of business, within a single generation. For instance, when, in 1897, larger plots between Main Road and High Street were surveyed and sold by the Village Management Board, the Henn family bought two plots, the Allengensky family three, the Groenewald family two and the Sheriffs and the Warringtons purchased one each.

Two businesses stand out in the real estate sector. These are the Mossel River Seaside Township Development Co. and the Poole’s Bay Township Development Company. Both of these were initiated by Jack Poole, whose wife had inherited the land from her grandfather, Duncan MacFarlane. It seems to be a feature of real estate transactions that a deal could be struck over an unsurveyed plot, and it could be occupied immediately. The formal survey might take place months or even years later, and registration later still. In one case, more than 20 years elapsed between ‘purchase’ and final registration.

[Jacob Oblowitz’s] shop carried a very varied stock, piled in confusion, and he would never admit – unless absolutely forced to do so – that he did not have any particular article. Nothing was marked and prices would vary considerably, according to the customer. Olive Crews told me that on one occasion she went to Oblowitz’s shop to buy some Post Toasties, the first of the many bowls of cereal we have today, but new on the market then. The children had become tired of porridge for breakfast every morning and she had suggested to my mother-in-law that they be given Post Toasties instead.

Mr Oblowitz said yes, of course, he had it. After searching among his shelves he triumphantly produced a box of postcards. “There! I say I have it! Oblowitz has everything!” he exclaimed proudly. “No, Mr Oblowitz, I don’t want postcards. I want Post Toasties,” Olive said. “Hey! Vot you say? Postcards you ask for, postcards are vot I got!” Oblowitz insisted. “Post-Toasties,” Olive said firmly. “Post-Toasties, hey? Post-Toasties,” he muttered and went searching around the shelves again. But eventually, he had to admit defeat. “Vot sort of t’ ing is dis Post-Toasties?” he demanded. “It’s a kind of breakfast food,” Olive explained as she prepared to leave. As she reached the door, he called to her, “Vait, vait, Miss Crews! I’ve got herrings!”

By 1910, the following types of business were operating in Hermanus (with the names of those involved in brackets):

As new hotels and shops opened in the early years of the 20th century, several townspeople revealed another aspect of a successful capitalist economy.

P John Luyt, the owner of The Marine and Riviera Hotels, had previously worked for an insurance company (the Southern Life Association) and must have known something about selling to the public. He started actively marketing the town.

His activities included many techniques used today. He collected information about attractive aspects of the town and directed promotional material at groups interested in each aspect. He produced printed material describing the attractions of Hermanus and mailed these to thousands of targets, in South Africa and abroad.

Luyt’s six daughters from two marriages spent many long afternoons at The Marine, addressing and filling envelopes by hand. All the hotels took extensive newspaper advertising and the massive coverage associated with Bill Selkirk’s record shark catches was twice featured on a full-colour cover of the Illustrated London News. This publicity boosted the numbers of those visitors aiming at a pleasant angling holiday or looking for international recognition as a fisherman. 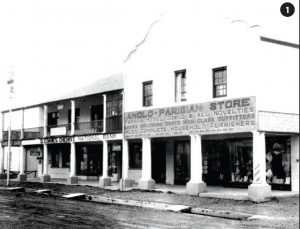 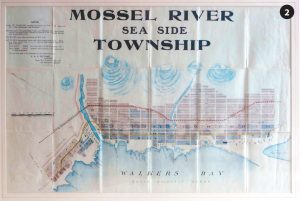 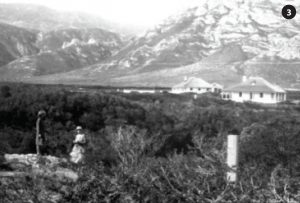 1. The Balcony Building in Harbour Road dates back to 1906 and the premises were rented by various early businesses.
2. A map of the Mossel River Seaside Township Development initiated by Jack Poole.
3. The Mosselrivier Farm on which Hermanus was born, had only fynbos vegetation and no grazing.