In this article, which forms part of a comprehensive series on the chronological history of Hermanus, Dr ROBIN LEE of the Hermanus History Society focuses on the history and development of the town’s business sector.

On 8 March 1978, the local newspaper (then known as The Times of Hermanus) published a story entitled ‘How Commerce Started in Hermanus’. It featured an interview with 93-year old Mr Christian Warrington, who stated: “… the first shop in Hermanus was situated on the seafront, where the Ocean View Hotel [now 45 Marine Drive] is today.”

The owner was a Mr Moore of Stanford, and Mr Warrington’s mother was in charge. “The stock consisted mainly of groceries and fishing tackle… The next [shop] was owned by a Mr Pfeiffer of Caledon and was situated where the present Princess Café stands, on the Main Street.” The R5 Store presently occupies this site.

Mr Warrington added that there were “… no hotels of any sort, but a Mr Beukes had a stone cottage on the seafront, better known as a ‘strandhuis’ [beach house], from whom visitors could hire rooms.”

Perhaps without knowing it, Christian Warrington identified the central fact about the Hermanus business sector: it is almost exclusively a service economy, maintained by visitors’ spending, with no real wealth creation avenues. This is not a death sentence. Many resort towns around the world live with the same heritage.

But it does mean that Hermanus needs a special kind of economic growth strategy, which the local Overstrand Municipality does not seem to have at present.

There is general agreement among later historians that the first retail, commercial enterprise was, in fact, this small general dealer’s shop that was opened in the early 1860s by Ephraim George Moore from Stanford, where he had a prosperous general dealers’ outlet. Moore approached James and Elizabeth Warrington with a proposal to establish a general dealer’s shop either next to or (some say) actually in the Warringtons’ house, which was just above Visbaai (the Old Harbour) on Marine Drive.

The shop was established under the supervision of Mrs Warrington (born Henn). Within a short time, the colonial government nominated the shop as the first Post Office in Hermanuspietersfontein. A daughter in the family, Miss Maria Elizabeth Warrington became the first Postmistress.

Although the town has grown much bigger, it is not much different. The composition of the business sector in Greater Hermanus in 2020 comprises about 1 600 individual businesses, which are divided into 27 categories. The six largest groups are business and financial services (276); building and construction services (230); accommodation (214); shopping (181); food and wine (125); and home and garden (116).

Readers will see at once that there are no conventional productive sectors listed. Mining was always precluded, due to the geology of the town’s location, though there is mention that PJ Luyt thought of investing in a manganese mine where Vermont now is. Nothing came of it.

The manufacturing of products to earn income from sales outside the town was also absent until the 2000s, when abalone and wine began to be ‘exported’ in some volume. The fact is that Hermanus always had a service economy and still does today. The task is to analyse the nature of the service economy and how it can best be sustained for the challenges ahead.

How the service economy grew over time
At about the same time as the Moore/Warrington shop was opened, a fisherman named Jean-Louis Wessels, better known as ‘Swede’, opened a boat repair and construction business in two cottages where the Burgundy Restaurant is now. He had an unfortunate personal life, in that he fell in love with a local woman whose husband had disappeared at sea. However, she could not prove that he was dead and so was unable to marry Jean-Louis. Living together without being married was unacceptable, so they existed in a kind of limbo. As far as we know, the business did not continue beyond Wessels’ death.

The real expansion in business activity came in 1896, when Dr Hoffmann opened the Sanatorium, and Walter McFarlane built the Victoria Hotel. Both enterprises are best categorised as accommodation services, though the Sanatorium had medical facilities as well. But they served very different markets.

The Sanatorium attracted people staying a considerable length of time, while the Victoria catered mainly for people passing through. Either way, by the turn of the 20th century there were more potential customers in and around Hermanus, either as permanent residents, or visitors staying for weeks or months, or just passing through. In response to differentiated demands, businesses offering different services started up. The first of these was the archetypal South African retail outlet known as a ‘general dealer’ or more usually in Afrikaans ‘n algemene handelaar.

These businesses included Oblowitz’s Store (corner of Main and Harbour Roads); Bekker’s Store (corner Main Road and Stemmet Street, Eastcliff ); Slabbert’s Grocery Shop (corner Church and Myrtle Streets); Uitkyk Store (where CTM is now); Outspan Store (Paterson Street); Segal’s Grocery Store (corner Main Road and Church Street); Warrington’s (Main Road); and Bouchers (Main Road). We In this article, which forms part of a comprehensive series on the chronological history of Hermanus, Dr ROBIN LEE of the Hermanus History Society focuses on the history and development of the town’s business sector. will look more closely at two of these in a later article.

The business sector gained momentum in the late 1800s when High Street, Aberdeen Street and Long Street were surveyed out of the Hermanus Commonage and plots put on the market. An analysis by Michael Clark for the Hermanus History Society shows that members of the original settler families, who had arrived as fishermen, immediately entered the property market and bought sites.

For instance, of the newly-surveyed plots between Main Road and High Street, the Henn family bought two, the Groenewald family two, and the Sheriff and Warrington families one each. Relative newcomers, but still part of the fishing economy, the Allengensky family bought three sites.

The fisherfolk moved quickly into business ventures and were at ease with the basic concepts of capitalist economic development, as we shall see in the next article. 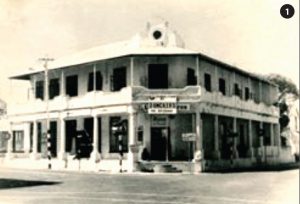 1. The Oblowitz Building, opposite the Victoria Hotel, before it became known as Lemm’s Corner.

2. The Ocean View Hotel, built on the site of the fi rst shop in Hermanus.

3. The Victoria Hotel, on the corner Main and Harbour Roads, where the Astoria Centre is now.