In last week’s article (Visbaai – The history of Hermanus as a fishing village) we followed the rise and fall of the fishing economy around Visbaai, resulting in a fishing culture that still lives on. But, Hermanus became equally famous for another kind of fishing, which also had economic consequences, writes DR ROBIN LEE of the Hermanus History Society.

This type of activity could also be called ‘fishing’, but was more accurately referred to as ‘angling.’ Angling involved individual fishermen, not crews, and the participants were usually of upper or middle-class social standing, fishing off the rocks or from a hired boat, with a single rod, catching large fish for personal use. Angling was the recreational activity offered by Hermanus to busy diplomats, bureaucrats and even minor aristocracy, such as the Earl of Athlone and his wife, Princess Alice.

Usually, the individual angler got involved only when the catch was ready to be reeled in. Even at this stage, he might be assisted by a local fisherman referred to as a ‘ghillie’, who did all the dirty work: digging bait, baiting hooks, casting, gaffing, and killing the fish. The angler took all the credit.

He (very seldom ‘she’) was much more prosperous than any local fisherman and could afford expensive imported equipment and tuition in fishing from the local ‘professional’, Bill Selkirk, a resident famous for his exploits in catching sharks of world-record size. He tutored anglers in the basics of the pastime, as well as selling them tackle from his shop near The Marine Hotel.

Noteworthy specimens were weighed and individual records kept at the hotel at which the angler was staying. The hotel chef would also prepare the trophy according to the angler’s wishes, and it would be consumed in a convivial fashion with other guests, accompanied by regular tales of ‘the one that got away’.

Berdine Luyt describes just such an incident at The Marine Hotel in the 1940s:

[Judge] Reggie Davis caught a large kabeljou a few days ago, a record catch. He was delighted and decided to have his photograph taken with the fish. It was rather late in the afternoon when he returned to the hotel, but Mother sent one of the office staff on a bicycle to Mr Ravenscroft [the local photographer]. Mr Ravenscroft sent back word that he couldn’t come until the next day, as it was time for his daily walk. No persuasion would make him alter his mind. So Reggie took the fish to the ‘vishok’ [fish-room] outside the kitchen, where it was hung, instructing the kitchen staff not to touch it.

The next morning a member of the kitchen staff came to the office in tears. ‘An awful thing has happened, Mrs Luyt’, she said. ‘[Name] has cleaned Judge Davis’s kabeljou. What are we going to do? I daren’t tell him’. The man who normally cleans the fish was off duty when Reggie brought his kabeljou in, and the other kitchen staff , being busy at the time, omitted to tell him that it was not to be cleaned with the other fish.

Reggie always came to see Mother in her office each morning after he had had breakfast; he would sit for a while and chat with her before going off to the rocks. Mother did not know how to break the news either, but he had to be told, and eventually, she blurted it out and then burst into tears herself.

Reggie took it very well. ‘Never mind, Joey,’ he said, patting her shoulder, ‘don’t be upset. It’s not the end of the world, Ravenscroft can still photograph the fish, even if it hasn’t any scales and no insides – it might look a bit peculiar, but it’s still a record catch.’

And so, later that morning, Ravenscroft duly photographed the kabeljou. That evening we had it for dinner.

A sort of collective ‘anglemania’ surrounded the run of a specific fish. ‘Runs’ occurred quite frequently when millions of a certain kind of fish entered Walker Bay. Berdine Luyt comments on a run in 1945:

For the last four days, the kabeljou has been running. Everyone is at Kraal Rock, which is almost a solid mass of bodies and lines, and all the anglers are in the most angelic tempers. Paddy [Berdine’s sister] caught two in one day, and we had them for dinner. Ginger [Berdine’s brother-in-law] has caught several every day, but Mac Prain holds the record with eighteen. Reggie Davis’s fish are bigger than anyone else’s – fortunately, because we then get to drink Liebfraumilch at dinner.

One should not underestimate the economic impact of angling. While the fish that were caught did not themselves generate income for anyone, anglers contributed in many other ways to the economic growth of Hermanus. They paid their ghillies and met the costs of their stay at the hotel, which in turn employed increasing numbers of the wives and daughters of the fishermen. They spent money at the local general dealers and demanded goods of a higher quality and price than the shop owner would stock for domestic consumption, thus stimulating the local economy.

Also, they acted as publicity agents for the town, encouraging more of their colleagues to visit. There are multiple records of people like Judge Reggie Davis or Sir William Hoy playing this essential marketing role as they went about their business around South Africa and the world. PJ Luyt of The Marine Hotel incorporated angling into his marketing campaigns for various sports in order to fill his hotel, using the idea of an ‘Angling Club’. Members competed to record the biggest fish caught in one day or fish of a particular species or the ‘most unusual fish’.

We can see the first indications of tourism in angling. Visitors heard about the attractions of the town, with a strong emphasis on the ‘healthy’ climate along the coast. It supplemented a wholly different type of tourism that we would call ‘wellness tourism’. This had been started by Dr Hoffmann’s Sanitorium in 1896 and Walter MacFarlane’s construction of the Victoria Hotel in the same year. The climate, health care and angling laid the foundation for our tourism industry.

Still, the third age of Hermanus was the age of fishing, focused on Visbaai (now the Old Harbour). Without romanticising the times, a quotation that still holds my attention appears in SJ du Toit’s Hermanus Stories I, attributed to a long-standing Hermanus resident, Attie Bishop:

It is wonderful to see the boats full of fish entering the bay. After off -loading the fish, the boat is carried up the ‘hard’, and the fishermen take their fish to the merchants. They’re paid half-a-crown per ‘geelbek’, and after gutted, the merchant sells it for five shillings.

The old fishermen gathered at the Royal Hotel for a glass of wine where big glasses were sold at a sixpence each. I remember one old man who was already very shaky and had to hold his glass with both hands. When he took his second glass, he could hold it with one hand as the wine had taken away all the shakiness!

On days when they did not go to sea, the fishermen gathered in a little house on the hill overlooking the bay. Those were the days when they had no money for a drink and just sat there to talk. They related that one day the weather was so foul that waves washed over the hill [cliff s] and came into the little house. They talked about the ocean and how they watched the mountain to determine their position.

Sad to say, but Hermanus’s fishing history effectively ended in the same way as fisheries all over the world did. Serial over-fishing by trawlers with huge nets destroyed the vast shoals of small fish – anchovies, pilchards and silverfish or ‘doppies’, as they were known locally. Deprived of food, the larger fish left Walker Bay. Record catches by single fishermen faded into memory, while politicians and interest groups squabbled over sanctuaries and marine-protected areas and fishing quotas.

The truth is that the days of the fishing village will never return to Hermanus, and only the Old Harbour Museum helps keep the old Visbaai alive in our memories. 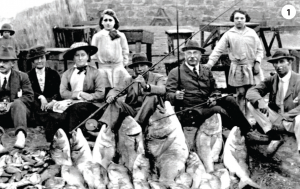 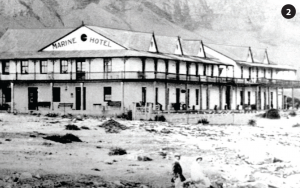 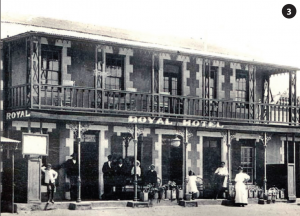 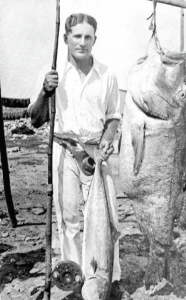 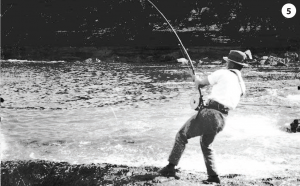 1. Sir William Hoy (third from the right) poses with a fi shing group and their catch.
2. The Marine Hotel, shortly after it was built in 1902. Many hotel guests participated in recreational angling and the kitchen staff would prepare and serve their catch for dinner.The Royal Hotel, circa 1905.
3. Local legend, Bill Selkirk with some of his catches.
4. Bill Selkirk fishing at the Old Harbour.