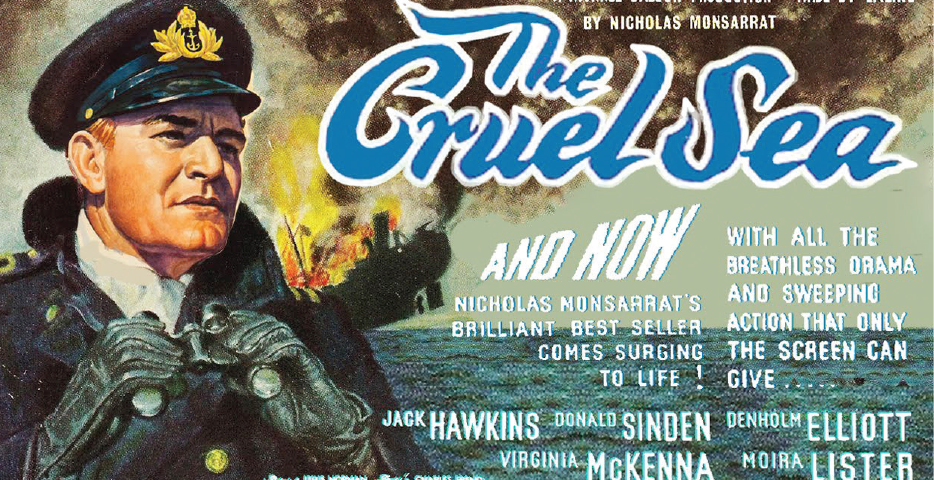 British author, Nicholas Monsarrat (1910 –1979) spent several years in South Africa after World War II. Some of this time he spent in Hermanus, where he found The Marine Hotel a conducive place to work on his ﬁrst and best-selling novel, The Cruel Sea.

At the end of the book, there appears the following information as to where the novelist lived while writing the book: Hermanus, Cape Province – Johannesburg, Transvaal, April 1948 – May 1950. A book that would sell over 11 million copies, in 23 languages, and be made into a famous ﬁ lm was partly the product of the writer’s time in Hermanus.

Monsarrat was a disciplined and proliﬁc writer, having to work hard and publish regularly to keep up with the expenses of his lavish lifestyle. Luckily for him, seven of his 15 novels were made into ﬁlms, which earned much more for him than book sales did.

Joey Luyt twice refers to Monsarrat as a guest in The Marine Hotel. Neither reference is complimentary:
Another regular visitor was Mr Jim Crosby of Johannesburg, General Manager of the CNA (Central News Agency). His daughter, Philippa, married Nicholas Monsarrat. She wrote acid articles, lampooning well-known ﬁgures in South African society that barely escaped libel and appeared in the ﬁrst issues of Femina. Mr Monsarrat was later to be known in Johannesburg as the ‘Monster Rat’ and Philippa as the ‘Cruel She’!

Monsarrat wrote part of one of his books in our Front Cottage. He was a tall, supercilious young man, not easy to like.
Monsarrat was born in Liverpool. His parents were Sir Keith Monsarrat, a surgeon, and Ada Marguerita Turney Waldegrave. Nicholas was educated at Winchester College and Trinity College, Cambridge, where he obtained a law degree with honours. He started working in a solicitor’s oﬃce in Nottingham but found the law uninspiring. Instead he turned to writing, moving to London and supporting himself as a freelance journalist, writing for several newspapers.

He produced four novels and a play in the period 1934–1939. His greatest success was the play, which starred the world-famous actress, Greer Garson. Nevertheless, it closed after only three weeks.

Monsarrat served as a volunteer in World War II, ﬁrst as a member of an ambulance brigade and then as a member of the Royal Naval Volunteer Reserve. His lifelong love of sailing made him a capable naval oﬃcer, and he served with distinction in a series of small warships (corvettes and frigates), assigned to escort convoys and protect them from submarine attacks. Monsarrat ended the war with the rank of lieutenant commander and drew on his wartime experience in his post-war sea stories, especially The Cruel Sea.

Immediately after the war, Monsarrat entered the British diplomatic service. He was posted at ﬁrst to Johannesburg, from 1946–1952, as a senior member of staﬀ of the British Information Oﬃce in South Africa, and then, from 1953–1956, to Ottawa, Canada. In both positions, he was dedicated to promoting British culture to the local population.

He became a fulltime writer in 1959, basing himself ﬁrst on Guernsey, in the Channel Islands, and later on the Maltese island of Gozo, while travelling extensively. He was married three times. His ﬁrst wife was Eileen Rowland.

After their divorce in 1952, he married Philippa Crosby, the ‘cruel she’ referred to earlier. Philippa divorced Monsarrat in 1959, and he then married Ann Griﬃths in 1961. He was 49 years old, and she was 22. Ann was also a writer and produced a wellknown study of the 19th-century novelist, William Thackeray.

For Monsarrat writing a novel had to be preceded by experiencing life, which gave him something to write about. In an interview early in his career, he stated:

I loathe the idea of growing roots, and I think people who grow roots go on writing the same book. It’s the same book over and over again, a book about roots by a rooted person, and I think this is the dullest kind of a life to live. No, you must get up and go, live a new life, and then write about it.

Monsarrat’s own eventful life was cut short when he died of cancer on 8 August 1979, at the age of 69. He was survived by his third wife, Ann, two sons by his second marriage, Marc and Anthony, and one by his ﬁrst, Max.

The Cruel Sea contains many descriptions of storms and huge waves. Standing at Kwaaiwater on a stormy day may well have taken Monsarrat back to the weeks spent at sea protecting Allied convoys. He is just one of many internationally-known ﬁ gures who had historic links to our town.