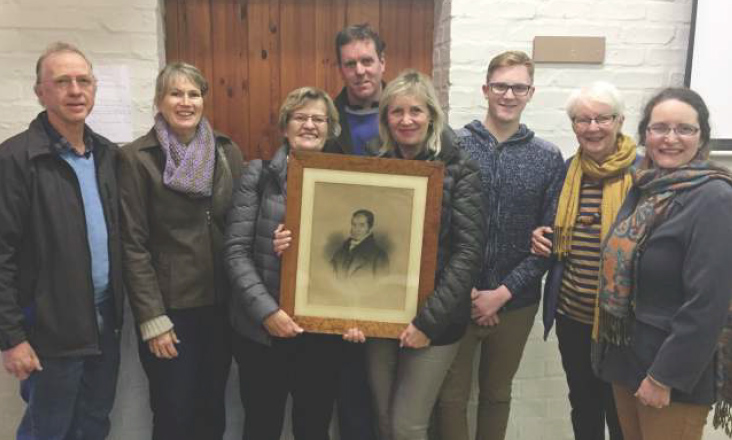 Eight members of the Philip clan were among those who attended the informative talk by Prof John de Gruchy entitled Dr John Philip: A prophet before his time, hosted by the Hermanus History Society on 6 August. These descendants of Dr Philip include (from left) Ross Philip with his wife Shelley (from Caledon), Ann Passmore (née Philip from Woking in Surrey, UK) and her sister, Janet Nagel (from Stellenbosch) who are holding a signed portrait of their ancestor, Andrew Philip behind them, with his son Marc, his mother Anne and his sister, Sue Raven, all Hermanus residents.

As superintendent of the London Missionary Society in South Africa, Dr Philip was one of the most influential figures in the Cape Colony during the early decades of the 19th century, championing the cause of the indigenous people. In his high-ly acclaimed book, Dr Philip’s Empire, Cape Town historian Tim Keegan writes: “If John Philip had succeeded in his campaigns for racial equality and justice, South African history would have been very different. So I think it is time to revisit his legacy. ”

According to Anne Philip, a gathering will be held in February 2019 to commemorate the arrival of Dr John Philip, his wife Jane (née Ross) and their two sons, William Enowy and John Ross on the Westmoreland in Table Bay, in 1819. For more information, Anne can be contacted on 028 399 3925.