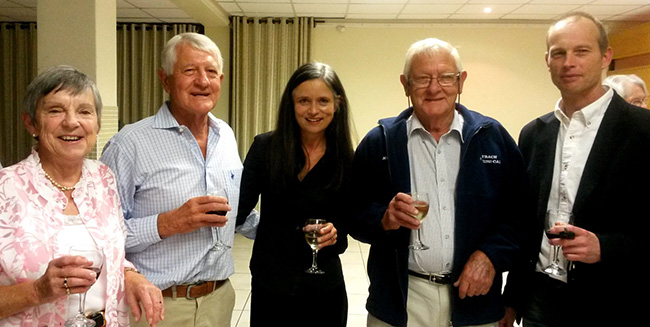 On 3 December an enthusiastic audience of 160 people attended the launch in the Municipal Auditorium of a new book on Hermanus history. The event was held under the auspices of the Hermanus Tourism Bureau as the book recounts the history of the Marine Hotel between 1915 and 1947.

The book was originally authored by Joey van Rhyn Luyt (1894-1985), the wife of P John Luyt, who owned the Marine and Riviera Hotels and was a leading figure in Hermanus life in the first half of the 20th century. Joey Luyt dictated the text in 1970 to her daughter Berdine and typescript versions have been in the hands of family members since then.

The published book was edited by Dr Robin Lee who also supervised the production and chose the illustrations. It will be a very welcome addition to libraries of those interested in Hermanus history and will make an excellent gift to family and friends who visit the town. The book is entitled “In Those Days: the Story of Joey van Rhyn Luyt at the Marine Hotel, Hermanus”. It retails at R260 and is available at leading bookshops, the Hermanus Tourism Office and the Marine Hotel.