History of Hawston in English

History of Hawston in English 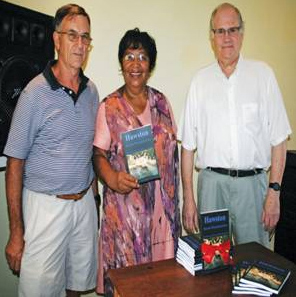 The English translated version of the book ‘Hawston: Tussen Berg en See’, Hawston: Between Mountain and Sea, was launched at the first 2014 members meeting of the Hermanus History Society on Tuesday.

The success of the re-printed Afrikaans edition last year paved the way for the society to take on the translation as a project.

The process leading up to finding a translator took a while and started when Gladys Gillion, one of the authors, was listening to a programme on the radio station RSG (Radio Sonder Grense).

“On Tuesdays there is a programme for people searching for jobs and one of the gents was looking for translation work. We phoned him, but his charge per page was far too much. We approached the Hermanus History Society. All glory to them, they made it work. Thank you from the bottom of our hearts!”

The translation was undertaken by a member of the History Society, Malcolm Gordon, with a few local wordsmiths helping with proofreading and editing. The book is quintessential Hawston, and contains stories and anecdotes about the early life of the sea fishing community, compiled from reflections of old folk, some who have passed away now, and those who still live there.

The narratives are thematically arranged and the chapters include: Origin of Hawston, Eccentric inhabitants; Corpses & ghosts; Medical facilities; Water, and Interesting personalities.

Fifty copies of the book were printed and are available from the History Society at R130 per copy. Contact Dr Robin Lee on 028 312 4072, or Michael Clark at mikeclark@hermanus.co. za .

Also discussed at the meeting was the society’s involvement in FynArts. Similar to the event held at the Windsor Hotel last year, entitled Fish, Chips and Hermanus History, this year’s event will be hosted at The Marine hotel on 11 June.

It will include an audiovisual presentation and talk by Dr Robin Lee on the various owners of the hotel and the who’s who that stayed at The Marine in years gone by which, among many, included the aviatrix Amy Johnson, post her Trans Atlantic flight.

The presentation will be followed by a tour of the hotel by general manager Hamish Hofmeyr. Two sessions are planned, a lunch and dinner, where a three-course meal will be served, with items from the hotel menu dating back to the 1940s.