Lemm’s Corner – a dream in the making

Lemm’s Corner – a dream in the making 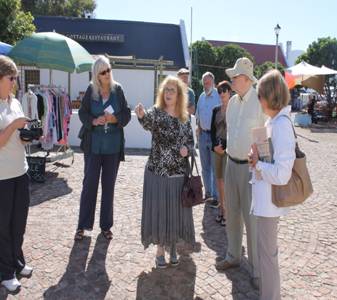 Lemm’s Stores used to be part house, part general dealer store and stood on what is known as Lemm’s Corner. The building was demolished in the 80s.

The daughter of Bernard Lemonsky – after whom Lemm’s Corner is named, visited Hermanus over the Easter weekend for the first time in 15 years. She lives in Scotland.

This visit is fortuitous, seeing the attention focused on the revamp of Lemm’s, and could not have happened at a better time, according to the Hermanus History Society and Beth Hunt from Hemingways, who has long advocated that something “be done” about the corner.

The home of Bernard, his wife Elisabeth and daughter Ruth, was on Lemm’s Corner. It was partly a house and partly a general dealer called Lemm’s Stores.
Ruth was five years old when the family moved to Hermanus in 1960. She attended primary school here. “It was a stone building then, with outside toilets,” recalls Ruth.

Along with this recollection comes many others of living on Lemm’s Corner in Hermanus with a then population of around 4 000, “which would swell to 30 000 over Easter weekend”.

“I remember one rainy day when I was bored, and sat looking out the window and how excited I was at the sight of a total of two cars in one hour coming around the corner!”
“I remember the shop well. It was an old-fashioned drapery selling material, hats, ladies clothes, menswear and household items.
“I remember the fig trees on the property that stretched to where the old library was, bushes of Christmas roses in the garden, the lawn, the vegetable patches.”

Many of her recollections are of places no longer around, nor is her childhood home on Lemm’s corner, which was demolished in the 1980s. “I have avoided Hermanus. It was so sad not to say goodbye to the house. Now that I am older I see things differently and Hermanus is often in my thoughts and dreams. I am loving being back here.”

Ruth says in one of her dreams she saw a development taking place on Lemm’s corner – that a decision had been made to rebuild the facade of the house, featuring lovely stalls.

This is a coincidence of timing with the revamp plans currently under way. For this purpose, a walkabout and meeting with Ruth, Elizabeth du Toit (manager of the Old Harbour museum) and members of the Hermanus History Society were scheduled on Monday morning. (The HHS has been asked by the Harbour Museum committee to put forward a proposal to include history in the developments).

Ruth explained the lay of the land back then to the group and said she would like to see something of that history incorporated into the new plans.

“It would, for instance, be lovely to have a bench here dedicated to the memory of my parents, Bernard and Elisabeth Lemonsky. Perhaps even a board depicting what it looked like before.”

Ruth has undertaken to provide drawings and photos of the lay-out of her childhood home and garden.

During the walkabout, Du Toit mentioned that investors may be interested in constructing a replica of the building. In which way, shape or form needs to be discussed and investigated, as the first trees will soon be planted on Lemm’s Corner.