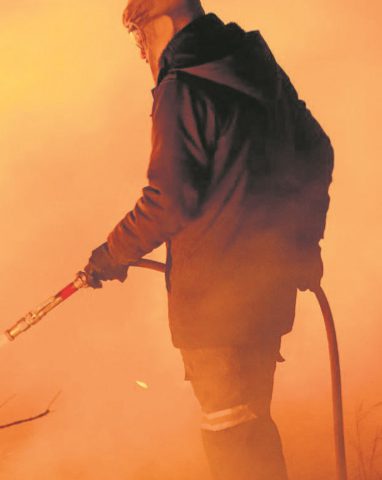 Part 2 of 3: The Great Fires of Hermanus

The territory now occupied by the Overstrand Municipality, including Hermanus, has experienced fire for millions of years.

The first fires occurred for purely natural reasons, most often the result of lightning strikes. No human beings were around to witness the strikes, but the vegetation slowly started to adapt to these events. The forebears of our fynbos, in particular, managed to survive. The various plants we include in the name “fynbos” gradually evolved defences against fire and, later, incorporated fire into their own reproductive cycle. They began to produce seeds that needed the heat of specific types of fire as well as the smoke to germinate. This fact was only discovered relatively recently by experimentation at Kirstenbosch, but it now forms a central part of any managed area of fynbos. It appears that the optimum period between burns is about eight and 10 years. Regular burning improves the growth of fynbos plants. Rain quite soon after the fire is also helpful. These fires could be regarded as “good” fires and they help conservation of the fynbos. However, since Europeans settled in the area we have made ourselves vulnerable to “bad” fires that destroy fynbos as well as livestock, property and, very occasionally, human lives. The main way in which we unwittingly caused more “bad” fires has been by planting alien species of trees, such as pine and eucalyptus that burn at a higher temperature than fynbos. A fire fed by aliens destroys fynbos and spreads easily to areas settled by humans. We also cleared huge areas of natural vegetation and built houses, hotels and shops close to areas that had experienced ‘good’ fires for millennia. Even a “good” fire started by natural forces becomes dangerous once it gets into settled areas. And over the years Hermanus has had many fires of this kind. We made ourselves still more vulnerable without knowing it, by our choice of roofing material. We choose to use “thatch” for roofing. Admittedly, not many options were available to the early settlers, and there are many advantages to thatch not least of which is cost. Mostly, thatching material can be gathered for free from nature; it is a good insulator, is water and wind-resistant if properly laid. Thatching material varies from place to place, but includes heather, broom, rushes, cereal stalks, bracken and turf sods. In the Overberg, the natural choice was a member of the restionacea family, with the botanical name of thamnochortus insignus. It was so prevalent that it was known colloquially as “dakriet” (roof reed).

However, dakriet is relatively flammable and catches fire from embers blown by a wind. A row or street of houses, all with thatched roofs of dakriet, are easily destroyed, as we shall see. From the time of arrival of the first settlers in 1855 to the 1930s, dakriet was universally used. There must have been many fires, but they went unrecorded. The little village of Hermanus was off the beaten track, had no railway link and was mainly known for the excellent fishing for commercial and recreational purposes. There was no newspaper or any means of recording such events. Records of fires in Hermanus and surrounding areas become available from the 1930s onwards. Description of early fires have come down to us through an oral tradition from people who witnessed them. Of course, we have no way of verifying the details. Recorded incidents begin in the 1940s, occurred throughout the 1940s and rose to a peak in the 1950s. The incidence of fires then diminished, for reasons we shall see. There are two main reasons given for the fires. First, there are fires which originated in the fynbos and then spread directly to buildings that are built too close to it. Secondly, and after electricity had been introduced, the fires mainly originated in one house, through an electrical fault that ignited the thatch of a single dwelling and the fire spread to neighbouring houses. The layout of streets may have provided the best arrangement for fires to spread, since the thatched houses were relatively close to each other, making it more likely that sparks would leap from one roof to another. In many reports a fire was observed to accelerate if the prevailing wind blew in the same direction as the streets. The wind seemed actually to pick up speed as it blew along the street, spreading the sparks more widely. In some cases, embers were observed travelling more than 200 metres before landing on a roof and setting it alight. In the 21st century two different sources of fire have become usual. The police have opened many dockets regarding fires that are started intentionally. However, I am not aware of anyone being tried or convicted. The dominant view seems to be that “boys” start the fires. In some cases, it is alleged they simply want to watch the helicopter drop water on the blaze. None of this can be authenticated. Then there is another sort of fire altogether, one which indicates as much threat to residents as any bush fire. These are the burning tyres that have become a feature of every protest march in Hermanus. At present, the only damage is to the road surface. But “tyre fires” do act as a warning that everything is not well in the town, and there is an ever present danger of conflict arising from financial and social inequality.