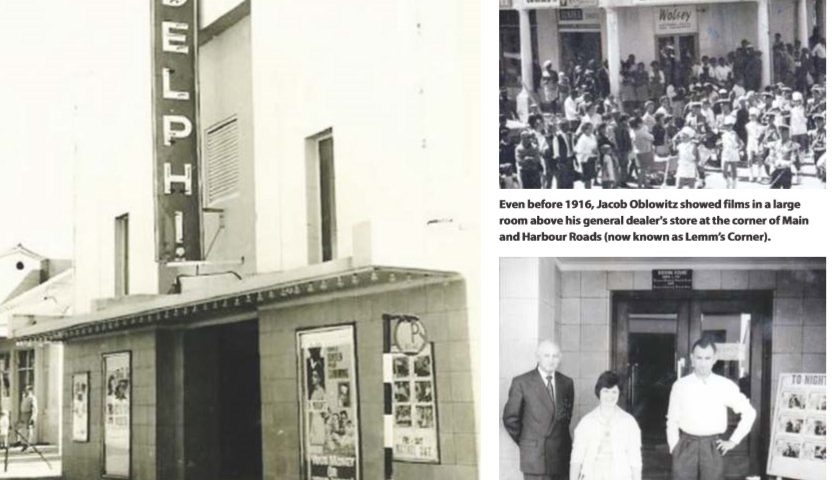 As a form of entertainment, film came very early to Hermanus, with the first cinema opening in town just seven years after South Africa’s first cinema opened in Johannesburg in 1909. Although the early theatres are fondly remembered by generations of Hermanus residents, the last cinemas in town closed in the early 2000s. With the arrival of the new theatre at the Whale Coast Mall, Dr ROBIN LEE of the Hermanus History Society wonders if it will find a regular audience and bring commercial cinema back to Hermanus.

The first purpose-built cinema in Hermanus was the de Luxe Cinema, later renamed the Adelphi, which was opened by Simon Allen in 1916.

However, films were available to the public in Hermanus even before 1916. Several writers record that Jacob Oblowitz showed films in a large room above his general dealer’s store at the corner of Main and Harbour Roads. The building later became known as Lemm’s Corner.

Jacob was often seen stopping passers-by in the street and urging them to come in and watch a performance. The small amount charged represented a much-needed addition to his income. A descendent of the Oblowitz family, Leonard Oblowitz recalls times when the films were projected upside down for a few moments, before being stopped and corrected.

The Adelphi was quite different. The exterior of the building in Main Road was an art deco design and there was comfortable upholstered seating inside. The foyer was tiled in a mustard colour and the interior was partly wood-panelled. The screen was behind maroon velvet curtains.

Usherettes were employed for every show. Patrons could not go to their seats unless shown by an usherette. Seats could be booked and families that returned to Hermanus regularly were allocated the same seating during holiday seasons.

Professional projectionists were employed, one of whom was Edward Smalberger, who lived with his family in a house in High Street, where Rossi’s is now.

For many years coloured patrons attended the same screenings as white patrons, but they had to buy tickets at a separate ticket office and go in through a separate entrance. Part of the upstairs seating was allocated to them. One writer recalls that he preferred to sit in the ‘coloured’ section, as comments by the audience were so amusing and pertinent.

In August 1968 politics caught up with the Adelphi. Allen was informed by the Department of Community Development that ‘non-whites’ could no longer be admitted to the cinema at any time. However, a local resident, Mr. George Eastland immediately started film shows for ‘non-white’ audiences in the Moffatt Hall in Mount Pleasant.

Simon Allen drove to Cape Town to choose the films for the month. Making a selection was no small task, as the programme changed every two days, meaning a minimum of 12 programmes. The films themselves were sent by rail to Bot River and then by railway bus to the Hermanus ‘station’ in Mitchell Street, now the Tourism Office.

After a fire destroyed the Adelphi in 1981, Hermanus was without film entertainment for some years. In the 1990s, when Harry Viljoen constructed The Village Square, two small cinemas were included. They were not particularly profitable and were closed in the early 2000s.

In Gateway Centre in the late 1990s, two cinemas were included, under the name The Stardust.  Attendances were patchy and the venture was not financially viable. This remained the case, even when U3A joined forces with the proprietors and publicised the offerings to its members.

In quite a different situation, Romantiques, a shop specialising in Bygones and Collectables in an original fisherman’s cottage in Aberdeen Street, has created a vintage cinema seating about 20 people. They screen nostalgic films via an old reel-to-reel projector on Saturdays and during the FynArts Festival. This boutique cinema still operates, while the Whale Coast Theatre screens new commercial releases on a daily basis.

The author welcomes any comments or additional information. He can be contacted at robinlee@hermanus.co.za