Fick’s Pool: Past, present and future

Fick’s Pool: Past, present and future 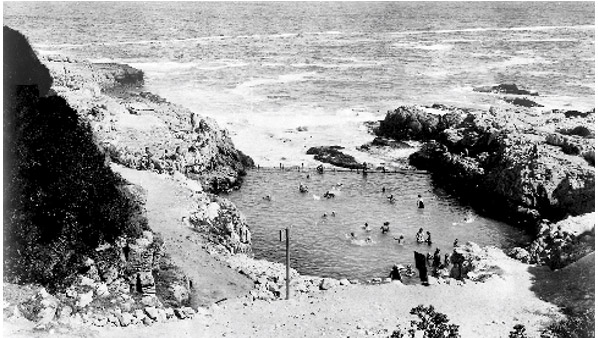 Today, Fick’s Pool is one of the lesser-known historical sites in Hermanus. Probably not one in twenty of our own residents knows what or where it is. But it has been in existence for nearly 90 years and has provided exercise, thrills and teenage romance for thousands, writes DR ROBIN LEE of the Hermanus History Society.

Fick’s Pool is situated below Marine Drive where the formal houses on the sea side of the road come to an end. Look out for a tarred parking area next to a substantial thatched residence. At this point the ground drops away quite sharply towards the ocean and Fick’s Pool comprises a narrow inlet from the open sea to a sheltered cove. This is one of the oldest parts of Hermanus. In 1854, while Hermanuspietersfontein was still the official name of the area and the first settler families had not yet left Herries Bay, the first twelve sites for houses were put up for sale by the Municipality just above Fick’s Pool at £1. 4 shillings each.

In the early 1930s a concrete wall was built across the opening of the cove, creating a tidal swimming pool. Waves break with considerable force into the pool and scour out sand and water that has stood for too long. As a result swimming in the pool is a very refreshing experience. At present it is seriously under-utilised.

Who was Mr Fick?
There are two different explanations of how Fick’s Pool came into existence and who it was named after. Some accounts attribute it to Mr J J Fick, who was the principal of the only government school in Hermanus during the 1920s and early 1930s. Known as the ‘Klipskool’, it was situated at the foot of Klipkop, which we now call Hoy’s Koppie. Mr J J Fick lived in a house on one of the sites above the inlet, then named the ‘gat’.

It was the time of the Great Depression and times were tough economically. There was little money available to provide entertainment for pupils during weekends and holidays. Children from families living in Mossel River and Voëlklip had access to several beaches (Langbaai, Voelklip, Kammabaai and Grotto) and could entertain themselves. But there was not much to do in the town itself, except hanging around the Old Harbour, then known as ‘Visbaai’, watching the fishermen and getting into bad habits.

We know that the Oblowitz family, which owned a prosperous general dealers store at the corner of Main and Harbour Roads, actually sold up and returned to Cape Town because their only son, Sidney could not be prevented from playing truant and hanging around with suspect companions at Visbaai. Sidney reveals this himself in a remarkable set of television interviews he gave at the age of 95 in 2010.

Mr Fick petitioned the Council to create a swimming pool in front of his house. This involved considerable blasting of the rocky cliffs and the removal of a large pointed rock that would have been in the middle of the pool. Then the concrete wall was built and, a little later, basic wooden changing facilities were added. These were painted white and were erected on the north side of the pool. They can be seen in old photographs and were attractive in themselves, unlike the unattractive face-brick building to be seen there now.

It seemed a good thing to name the pool after the man who had motivated its construction and so ‘Fick’s Pool’ came into existence, probably in 1933. It was an immediate hit with schoolchildren.

The other Mr Fick
The second explanation is more prosaic, but contains more verifiable data. Another family with the name of Fick had been living in the Caledon area since at least the 1870s, according to Mr ‘Lampie’ Fick, the present owner of the farm Weltevreden and former Cabinet Minister.  Documents exist proving that his ancestor Josias Servaas Fick served as Field Cornet for the Caledon ward from 1870 to 1885.

There is further documentary evidence that on 16 August 1889 an erf (plot) in Hermanus, adjacent to the twelve previously sold, was granted on a quitrent basis to the same Josias Fick. The erf extended from the northern end the pool, across Marine Drive (which had not yet been built) and all the way to Church Street, enabling the family to keep chickens, a cow and sheep. Josias Servaas Fick began to spend more time at this holiday home and got into the habit of going for a morning swim each day. He apparently also successfully persuaded others to join him and soon people were referring to “Fick se Gat”. This was later changed to the socially more acceptable ‘Fick se Poel’ and then anglicised into “Fick’s Pool” .

The summer haunt of 1940s teenagers…
Either way, by the mid-1930s young people were enjoying themselves at Fick’s Pool, using the term of endearment “Fikkie’s Pool”. Numerous photographs show numbers of people using the facilities, but the best written description I can find refers to Fick’s Pool in the 1940s. It was written in 2003 by Una Graven, a grandchild of Christiaan Warrington, of the original settler families. It is part of a contribution she made to S J du Toit’s Hermanus Stories III:When we were approaching our teenage years,

When we were approaching our teenage years, Fikkie’s Pool was our summer haunt. The beaches of Voëlklip and the New Beach as we called the Grotto Beach then, were out of our reach as none of us had any means of transport… Fikkie’s Pool was where it all happened – splashing in the tidal pool, being frightened when the high tide swept over the retaining wall, clambering over the large rocks and spreading a towel on the warm stone, to lie for hours with the glow of sun on your back. It was giggling and gossiping and taking shy peeks at the opposite sex. It was showing off and innocent ?irting with the exciting uncertainties of romance. It was where the boys challenged each other to what seemed to us then, death-defying dives from the top of the cliff just outside the sea wall of the pool… Fikkie’s Pool was an idyll.

…And the site of tragedy

Another story linked to Fick’s Pool is tragic and concerns the death of a member of the same original settler family, the Warringtons.  On a New Year’s Day in the late 1920s Joe Warrington persuaded Skipper van Dyk, Tommy Montgomery and a couple of other men to go after a school of sardines just off Fick’s Pool. Unfortunately, a whale became interested in the boat and eventually capsized it. Arderne Tredgold describes the resultant events in this way:

Joe Warrington was fishing, as the custom was, with his lines tied to his big toes. He was thrown out of the boat, the lines must have twisted round his feet so that he could not swim and he was drowned. The others managed to cling to the boat. They were not very far from the shore but it would have been dangerous to swim to the rocks (around Fick’s Pool) with the waves breaking over them. They shouted for help but most of the village was resting after New Year’s celebrations and one or two who did hear them thought that someone was playing a New Year joke.

The men were eventually rescued but Joe Warrington’s body was washed up some days later near the harbour. His feet had been severed by his lines.

General Jan Smuts
Fick’s Pool has yet another claim to fame. It was used frequently by General Jan Smuts. Smuts often visited Hermanus, staying in The Sanatorium, his sister being married to the owner and medical practitioner, Dr Joshua Hoffmann. Smuts started his daily routine with a swim in Fick’s Pool, followed by breakfast, working during the morning, rest in the early afternoon and then a brisk walk to the top of the mountain behind Northcliff before dinner.For a relatively obscure

For a relatively obscure site Fick’s Pool has a lot of history attached to it. There is no doubt that it deserves to be more widely known and appreciated in Hermanus.