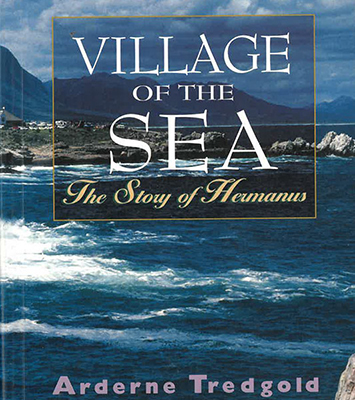 May Arderne Tredgold features importantly in the history of Hermanus. In 1965, at the age of 64, she published the first book-length history of Hermanus, entitled Village of the Sea: The Story of Hermanus. The book is still in print, more than 50 years later and is for most people their introduction to the town. The memories of many residents long since passed away have been preserved in her writing and though it appears there was some criticism of factual inaccuracies when it was first published, it remains the touchstone of histories available to us.

Yet we are unable at this time to document how often and when Tredgold visited Hermanus, which will be the focus of further research. (1) She deposited all her own and her family’s documents with the South African Library in 1985 and there is no record of anyone having worked on these. What follows is the outcome of intensive research carried out by a small team from the Hermanus History Society in 2016.

In her name, Arderne Tredgold (or “Dick”, as she preferred to be called) brought together two prominent Cape Town families of the 19th century. Her surname came from the family of Robert Cecil and Edith Louisa Tredgold, her parents. Her middle name came from her grandparents Ralph Henry and Joanna Arderne. The origin of her first name (“May”) is unknown. Let us start with the important facts about the Arderne family.

Ralph Henry Arderne was born in England in 1802 and came to South Africa sometime in the 1820s. There is a record of his marriage in 1831 in the Dutch Reformed Church in Cape Town in 1831 to Joanna Allsopp, also from England.   Arderne was a successful timber merchant and acquired a piece of land in Claremont, 5.8 hectares from the historic Stellenberg farm, around the rear of Table Mountain. He built his home there and the property became known as The Hill.

He was one of the founders of the Cape Town Botanical Gardens in the old Company Gardens in 1848. Development of the garden was continued by his son, Henry Mathew Arderne into the early part of the twentieth century. The father and son duo communicated with Sir William Hooker and Sir Joseph Hooker, the father and son directors at Kew Gardens, and the Ardernes sent newly discovered plants form South Africa to them (as well as other botanic gardens of the world). In about 1846 he began developing a garden on his own property, with great success. Admiration for the garden grew, as the citizens of Cape Town began to appreciate it as a place of exceptional beauty.

In 1843 the Ardernes were blessed with a daughter, Susanna, who, in 1864, married Clarkson Sturge Tredgold, who had also emigrated from England and was working in the timber business of R H Arderne, already mentioned. A son, Robert Cecil Tredgold was born in Cape Town in 1869, and married Edith Louisa Hodd in London in 1898. The couple soon returned to Cape Town, where May Arderne Tredgold was born in 1901. There is a record of an older daughter, born in 1900 and named Kathleen Edith but as yet we know nothing about her.

There is an anecdote about Dick’s grandfather that is worth recounting. While he was inspecting a cargo of timber he had bought from aboard he fell into conversation with the ship’s captain:

“In his cabin the ship’s Master was talking to a spare man with blue eyes, set in a serious face, who had come aboard. They were discussing the cargo of timber the ship had brought from beyond the Indian Ocean, but every now and then the visitor glanced away at a tiny tree growing in a pot on a shelf. It was about six inches high and the shape of a child’s Noah’s Ark tree. When the business was finished, the visitor, whose name was Ralph Henry Arderne, pointed to the tree and said, “Would you tell me where that tree comes from?”

“It is a Norfolk Island Pine from Australasia.” the Captain replied. “I am taking it home to plant in my garden.”

“Would you be willing to sell it to me?” Arderne asked. “I have recently bought a property, and am hoping to lay out a garden with trees and plants from as many parts of the world as I can, and I know the Norfolk Island Pine is a very handsome tree.”

“Well,” said the Captain at a venture, “I’ll take five pounds for it.”

That was a very large sum in 1847, but Arderne was so anxious to have it that he paid it without argument. … Arderne was not yet living on his new property, which had been part of the old Stellenberg estate; he was still busy clearing the ground and he was living in a house just opposite. … He had already planned the grounds and now he selected a spot that would be about halfway between the site he had chosen for the house and the road from Cape Town to Wynberg, and more or less in the main part of the garden. … All through its life [the tree] was carefully nurtured, watched and measured, and it repaid this loving care by growing to a great height of over 140 feet, towering above all the trees around it. It was said to have outgrown any other tree of its kind outside its native home.

When Arderne died in 1917, the original Norfolk Island Pine immediately began to wither and soon died. (2)

So much for Dick’s origins. We know nothing at present about her childhood or her schooling. The next record finds her at the University of Cape Town in 1922, when she graduated with a BA degree in English and History. Immediately her life moved into another sphere when she became Secretary to Sir Percy Fitzpatrick, then a politician and famous author of Jock of the Bushveld and other books. She also assisted in his political career and, in 1930 accompanied him to England on official business. There is a record of them sailing in the SS Messukuma, first class to Southampton.

However, this job seems to have ended quite soon and in 1931 she was working as a journalist in the London Office of the (Cape) Argus newspaper. She resided in Islington and, later, in Hyde Park and Bayswater. During the war she became the accredited journalist to the Royal Air Force and also the London correspondent for the Argus. She spent much of her time gathering news of South Africans serving in the forces. Right at the end of the War, she had the opportunity to visit recently liberated Holland and wrote admiringly of the Dutch Resistance.

In 1946 she returned to South Africa and joined the Argus staff. She worked there as a journalist until she reached retirement age in 1964.She was a general news reporter and at one stage the only woman journalist in the newsroom.  An interesting facet of her work was meeting Union-Castle mail ships at 7.30 am to obtain interviews with any VIPs on board.

In addition to serving as President of the Cape Town Branch of the SA Association of University Women, Arderne gave constant support to its Student Aid Fund, raising money to increase it by giving vivid talks illustrated with slides of professional quality. She published four books: Village of the Seas: The Story of Hermanus (1965), Frances Nettlefold (1968), Bay between the Mountains (1985), and The Ardernes and their Garden: A Family Chronicle (1990). She also used her writing skills for the many organizations for which she worked:  as editor of  the  SAAUW Bluestocking and by contributing to the Historical Society’s Newsletter from its inception in 1970 and becoming Editor of its annual journal CABO from 1982 . She was also an active member of PEN Club, the Archaeological Society, the Simonstown Historical Society, and a knowledgeable lover and supporter of music, ballet and theatre.

(1)  An avenue of inquiry may have opened up in relation to the Nettlefold family and Arderne’s experience of Hermanus. Tredgold wrote a book on Lucy Frances (“Nancy”) Nettlefold, a prominent women’s rights activist in the UK, based on a personal friendship. We know from other sources that a member of the Graaff family of Cape Town married into the Nettlefold family. The same person had strong ties with Hermanus, and lived in the town towards the end of her life. Lucy Nettlefold travelled to Cape Town after her retirement in 1960, to stay with her sister who was living there. As Arderne was already a close friend they would have taken up the relationship. In fact, records show that “Nancy” Nettlefold became a member of the SA Association of University Women an organisation Arderne already supported. This may give the Hermanus connection since Arderne would have been researching her book on Hermanus in the 1960s.

(2) There is a connection here with Hermanus, where Norfolk Island Pines are in abundance. S J du Toit tells the story of a Hermanus contractor who had delivered a load to Cape Town and was to return empty. H saw a large quantity of small Norfolk Island Pines for sale and decided to buy it and resell in Hermanus. He did so outside the Kraal Rock Tea Room in Poole’s Bay for 1/6d per sapling. They were snapped up and today are everywhere. Robin will check out this story.

(3) A member of the team with knowledge of Fitzpatrick is searching for information about Arderne in this, the final phase of his life. He died in 1931 in South Africa.

(6) Information has already been provided by the SAAUW. It is possible that one or more of the other organisations can provide further insight.

We need a portrait of Arderne