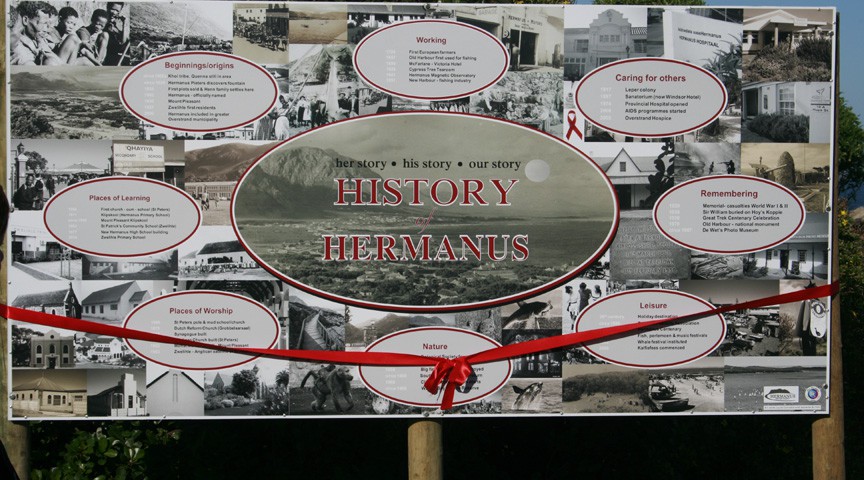 Friends of Swallow Park: The History Society hopes to encourage a Friends monitor the park and to find opportunities to use the park as a place for learning about our past and present with the potential to host outdoor exhibitions and theatre.

Monthly inspections are undertaken by the committee to monitor the condition of the plaques and report back to the area manager. The history society sees this as a collaborative venture with the Overstrand Municipality.

Hermanus History Society is concerned with signage which makes the history of Hermanus visible to resident and visitor. This is central to our mission.

In 2012 the first History Board was erected on Hermanuspieters plain.

A renewed interest in the history of Hermanus started in 2008 when S J du Toit, a well-known writer who was passionate about the history, the people and places of related to Hermanus and Stanford, introduced me, a relative newcomer, to local history. Subsequently a request by the Hermanus Heritage and Aesthetics Committee for a timeline of the history of the town, led to the formation of an informal History Group including the late S J du Toit, Elsabe Brink, a social historian, Leli Hoch, who has a keen interest in the history, and Lucie Conradie, a graphic artist, and myself. We were fortunate to have had access to the resources gathered by local historians: Happy Engela, the late John Annandale, and the late Hercules Wessels, who were happy to assist. The late Mayor, Theo Beyleveldt, also supported our endeavours. In the process of developing the timeline, a number of public participation meetings were held with locals interested in history. In 2012 the group, and the interested locals, formed the Hermanus History Society. Their inaugural project was the production of a history board which was erected at Hermanuspietersfontein site on Marine Drive. Later a second board was erected on the cliff path at Die Gang.

In our efforts to create a comprehensible timeline reflecting Hermanus history, we first compiled a chronological list of dates, then we began to question the data in order to gain an understanding of the meaning of the information gathered, in terms of people, places, events and themes.

With the history board we wanted to demonstrate by our approach, that history is about all people within a social, economic and political setting. We chose to focus on the conceptualisation of history as: his-story, her-story and our story. Formerly history has been mostly about his-story; conventionally the Big Men in History, but today it is also about her-story; about women whose stories have not been told and have thus been absent from history. Ultimately we wished to tell Our Story, the story all the ordinary people of Hermanus doing ordinary things, regardless of race, culture, or religion.

In 2014 a second History Board was erected at Die Gang, historically a popular fishing spot along the Cliff Path.

Since this time two history walks (Project 3: Hoy’s Koppie and Project 14: Cliff Path) have been created based on data collected from History Society experts and produced in scripts designed for use by trained guides or residents in self- guided walks.