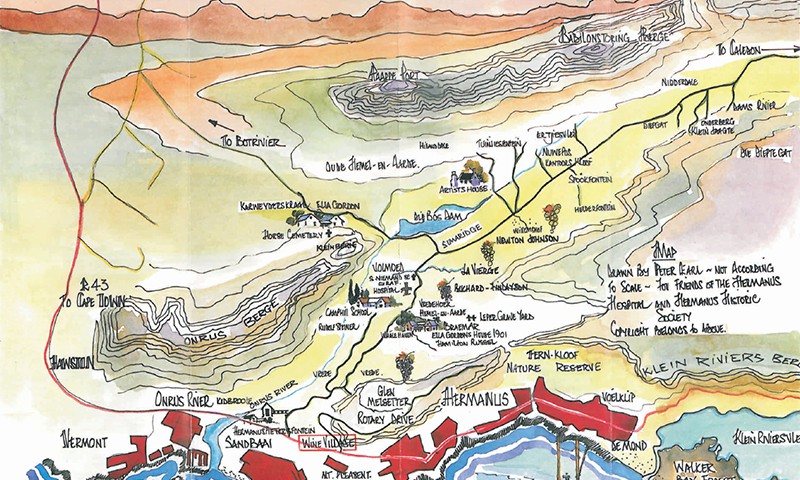 The toll gate
On the Hermanus side of the narrow entrance to the Hemel-en-Aarde valley, a government toll house and toll-bar were installed in 1897.  Tariffs included two pennies (2c) per wheel per vehicle, six pennies per wheel on a wagon without a brake, and so on.  Toll money caused much hardship to poor people in the valley. Farmers appealed for the abolition of the toll but their pleas were ignored.  After World War II the toll tax was discontinued. A tight-fisted Caledon farmer refused to pay the government. On Tuesdays the toll was free. He passed the toll before daylight and after off-loading and doing his business in Hermanus returned the same day – toll free.    A horse with four white feet was allowed to pass toll fee.  Hence the Afrikaans saying “witvoetjie soek” (to seek white feet – i.e. to seek favour).

The Preekstoel rock
The “Preekstoel” (pulpit) rock overhanging the road near the toll house was a magnificent sight but with growth in traffic and the potential danger of a blind corner led to road widening. In 1960, the Preekstoel had to be destroyed using more than 300 loads of dynamite to accomplish the task. (Ref 1)

Braemar School
Named after the Scottish town Braemar where the mountains resemble those in the Hemel-en-Aarde. The early farmer, Miss Ella Gordon who came from Scotland probably named it. Every year the famous Highland Games are held at Braemar, Scotland.  Ella bought the farm in 1901 and sold it in 1910 to a certain Mr Le Roux. It continued as Braemar, an agricultural farm. The house built by Ella, was used as a one teacher school after 1910. An earlier school in Ertjiesvlei closed when learner numbers decreased and children were taken by bus to attend Braemar.  Some farm children attended school two days a week. The other days they worked on the farm.  Today the old school building, beautifully restored, is used by Hamilton Russell Wine Estate as an office.

Camphill School and Community Farm
In 1952 a Rudolph Steiner school was founded by Frank and May Redman Today Camphill provides supportive schooling and care for children, adolescents and adults with special needs. Early in the 1970s a trained Waldorf teacher, Lawrence Adler joined the school and  it soon became a thriving village on the two farms providing a stimulating, social life and work for the residents.  Festivals and artistic activities form part of their annual programme. In the same year the name changed to Camphill.

Camphill Community Farm
Workshops make products that are for sale for example dairy products and herbs. There are small candle and soap workshops employing residents with special needs.  Festivals and artistic activities form part of their annual programme.

The farm Attakwaskloof, known as Hemel-en-Aarde belonged to a widow, Susan Niemand who was herself a leper. Attaquaskloof  was the home of the Attaqua Koi tribe [Attakwa meaning Men of Atta]. The settlement started with huts and vegetable gardens in 1817.  A hospital was built for the benefit of 120 Lepers by the English Government.  Dr Edmund Burrows wrote in Overberg Odyssey (Ref 2), “A Moravian missionary of Genadendal became steward of and ministered to the Lepers. The celebrated Dr James Barry inspected the colony and instructed great improvements in the conditions, food and bathing in the sea by those inmates who could walk.” Dr Burrows ended his story with: “bringing down the curtain on the first specialized public health institution established in South Africa.”

Well-known traveller, Teenstra passed the hospital in 1825 and remarked: “the building was very large, but the windows were set so high and from outside it looked like a prison”.
None of the patients were in the hospital voluntarily but were forced to be there by their illness.  About 400 lepers are said to be buried in the valley. In 1846 the remaining patients were transferred to Robben Island.    (Ref 3) Jose Burman wrote in 1989, that there was no trace of the Leper Colony buildings. Only a heap of stones showed the spot of the colony”.  He believed that the farmers of Vrede, where the colony was situated, were fearful that leprosy was still contagious and demolished the buildings”.

Dr James Barry’s, army surgeon at the Cape, employed by Lord Charles Somerset was instrumental in improving care for the lepers. When he learnt that the lepers were starving and running away and as medical superintendent of the colony he recorded later: “Nothing could exceed the misery of the lepers. He applied principles of hygiene, nutrition and improved accommodation to the care of the lepers”. (Ref 4)

Dr Barry’s compassion and care led to the reform of the settlement. On later inspection he noted that a place for Divine Service was needed. In 1824 a shed was constructed by Bishop Hallbeck of Genadendal and he conducted services there. Later in1823 the Government insisted that all healthy children go to boarding schools.  Genadendal missionaries served the remaining patients who in the last year decreased from 150 to 38 when they were moved to Robben Island.

At her death in England, it was discovered that Dr Barry was really a woman and had kept this secret during her life time. Women were still disbarred from studying medicine or entering the military in the Victorian era of Britain.

Volmoed
After the lepers left, the farm where the Leper Colony was situated, was divided into two farms, one of them Volmoed, meaning “full of courage” in recognition of those who ministered to the lepers.  In 1983, Bernard Turkstra and Harry Wood had a vision that South Africa needed a setting for a reconciliation ministry. The Volmoed community was established in 1986 and over the next 20 years slowly developed into a dedicated Christian retreat where people can receive spiritual care.  (Ref 5)

The De Bos Dam
An important milestone in the development of the water supply for Greater Hermanus was the implementation of the De Bos Water Scheme in 1976. Before the dam was built, however, a water dispute was brewing in 1973 and the presiding judge at the case, was Judge Marius Diemont.

Water Court case
Diemont told the newspapers that:  “it was a warmly contested water case in the Hermanus court. I was assisted by two assessors, a retired town engineer and a Uniondale farmer. The farmer was pessimistic and said the case would never be settled”.

“The entourage of the Water Court—judge, registrar and assessors, advocates, attorneys and witnesses—inspected the valley and the next five days I listened to the evidence”. “Charlie Sim, the then town clerk, described the town’s water problems; demographic experts spoke of the poor soil in the valley; and geologists and agricultural experts told us why the return on onions and cabbages was so disappointing”. “On the seventh day agreement was reached. The dam would be built at once, with a capacity of 1 320 million gallons.  (Ref 6)  Engineer, Mr PA Myburgh, of Ninam Shand, Consulting Engineers, in an interview regarding water in Hermanus, reported that all the raw water from De Bos is piped to the Preekstoel Treatment plant where decolourisation takes place before it goes into a clear well where it is chlorinated and made safe for human consumption. Myburgh, then retired in Hermanus, decided on the name Preekstoel when he heard of the ‘Preekstoel’ (pulpit) rock’s removal
De Bos has been in use for just over 30 years and until a few years ago seemed sufficient for the needs of the area, however, various water programmes have since been put into place.

Miss Ella Gordon, Karwyderskraal
Ella Gordon first owned Braemar in 1901, but she did all the farm work herself and attracted much unwelcome attention from curious passers, thus she moved to the remote Karwyderskraal.  Born in Scotland, she came to South Africa with a theatre group and later took up farming. With close cropped grey hair, she remained an eccentric to neighbours.  Ella was a strong woman, spent most of her time working on the farm or training her horses’ tricks that they performed at her command.

Miss Gordon was devoted to her dogs and horses. She buried the horses in a special graveyard where, today, thirteen tombstones each giving the life history of her beloved horse can be seen.  Every time when a horse died, a large hole was dug in the cemetery. The horse was loaded on a plank sleigh and slowly lowered into the hole while a tearful

Ella looked on. Workers had to fill the grave slowly and respectfully.
She looked after her farm labourers well, banned alcohol, built a schoolroom and a church with home–made bricks. Moravian ministers held services in the church. She regularly performed concerts with the children.   Ella died in 1958, aged 85, and is buried on the farm. She bequeathed the farm to the Moravian Church and although in poor condition her house and horse cemetery are still in existence.